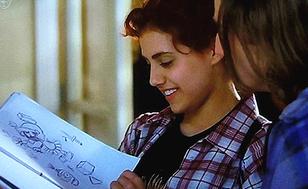 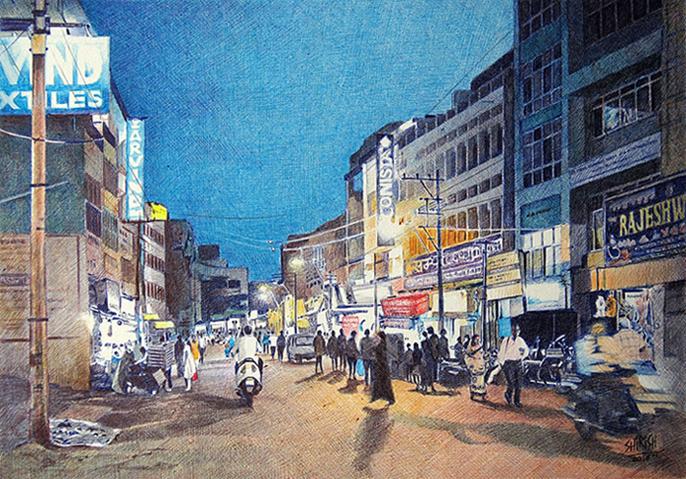 ''I am always inspired by the signs of human activity/existence. I like the chaos in a room where there is no neatness, only clutter. I find that disorder is more natural than order. And I find more inspiration for good composition from such scenes, as if it easy to eliminate a few unwanted objects in the picture to make it more appealing. Since I started drawing with ballpoint pens about eight years ago, my subjects have mainly been landscapes. I have also experimented with portraits, still life, abstract and more, but recently I am attracted more to the actual human activity on street, people, standing, walking and moving in many directions, busy in their own thought. And I did make a few drawings of this theme. Once I was in the market for some work in the evening and I saw this beautiful scene where there was a evening glow still in the skies and also the street lights and shop glow signs were all ''on'', having their own glow. I immediately captured a few snapshots, thinking that this would be a good reference for my drawing. My drawings have always shown all objects frozen in time. So this time I thought of showing blurred motion in my scene. You can see the motorcyclist zooming out of the scene in the right corner, and a lady walking hurriedly across the street. The more challenging part was to render shadows in many different directions. It took a lot of effort to correctly balance all the tonal variation from brightly lit areas to shadowed area. Working in full color was also really very interesting. I hope it has come out well'' ・

​​​​​PICK PIECES   The Ballpointer staff choose the artwork and let the artist explain it in their own words   Vol 3 No 7  originally posted Sept 4, 2016

Sadly, Brittany Murphy died in 2009. But what about those binders; do they still even  make  them?・

・Clueless  1995・Directed by Amy Heckerling
Early in the movie that made Alicia Silverstone a star (as Cherilyn 'Cher' Horowitz), frumpy new student Tai (Brittany Murphy) is introduced to the fashionable students of Beverly Hills High School. She carries with her a certain blue looseleaf binder, which gets lots of screen time to show Tai as an arty outsider clutching it like a security blanket...

Those faded denim-colored, hardcover, three-ring binders were blue canvas for a whole generation of bored students (and future ballpointers) throughout the 1970s and into the '80s. Judging by Tai's binder art she's apparently a fan of the popular Looney Tunes cartoon character Marvin The Martian, whom she depicted on the back cover and inside among other random doodles...

Also appearing in her doodles are six-pack abs on a musclebound torso with a question mark for a head; a beaming peace sign; 'BAM !' in graffiti letters; even a Tim Burton shrunken-head. At the bottom of a page where it looks like Tai was practicing drawing cartoon facial expressions, she wrote: 'Why is it so hard to draw happy!!' punctuated rhetorically with not one but two exclamation points... 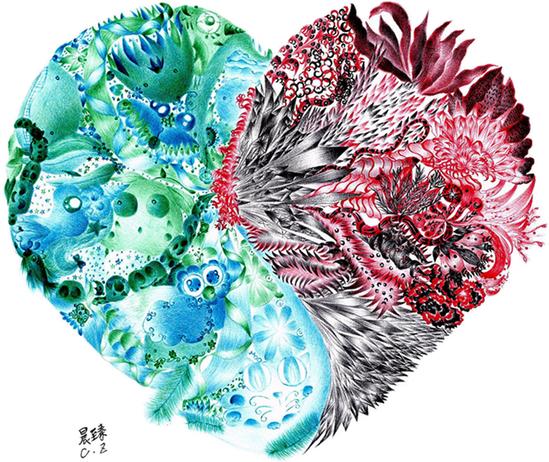 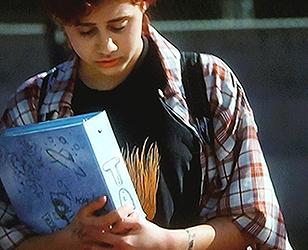 ''This painting was inspired by

a poem written by myself (above).

It's about the two sides of my heart.

One side is deep inside and the other

is reality. I search myself, sometimes

The left and right side of the picture

The heart interleaved with red and black symbolizes the human sides, the dark side. ''・

with red and black symbolizes the

human sides, the dark side. There is

beauty in the thorns, and wings fly to

the sky. For your own dreams, even though you can get hurt you can still face it and fly toward the blue sky.

Left heart: Blue and green colors symbolize peace and ease. A peaceful Pure Land is a desirable paradise, and inside of the paradise has exotic animals, lovely, naughty, funny, they truly exist in our childhood memories. Remember, it doesn't matter how old you grow, just don't forget your fantasy world'' ・