​​​​​PICK PIECES   The Ballpointer staff choose the artwork and let the artist explain it in their own words   Vol 3 No 8  posted October 3, 2016

With Hollywood's awards season reaching its peak, I offer this year's nominations for Best Ballpoint in a Supporting Role in an Academy Award-winning motion picture.

It's hard to top an institutionalized Angelina Jolie antagonizing hospital staff by pointing the business end of a ballpoint pen at her own neck in Girl, Interrupted, which won Jolie a Supporting ActressOscar and my own vote for Best Supporting Ballpoint Pen in a Dramatic Role last year.
Ballpoint pens, and doodling, continue showing up in many Academy Award-winning films. None as dramatic as Jolie's, but there they are, if only for mere seconds of screen time. In these instances, Warhol's proverbial ''15 minutes'' of fame are closer to 15 seconds; often 15ths of one second...

​''I really like self-portraits. All of my favourite artists used them as a way to explore and represent themselves—Kahlo, Van Gogh, Dürer, to name a few. They are also a challenge. Apparently it'd be impossible to recognize yourself if you saw yourself on the street. This is because of the distorted image we have of ourselves—for better or worse.

I initially planned to have a dragon curled around me with her head at my feet—but this piece was for a competition and the rules stated "no pets." So, I decided to focus on my love for plants. Half are native to Ireland and half to Hong Kong—my two distant homes. I wanted there to be a strict divide between the varieties, but as (more) plans went askew, I started squeezing things in anywhere. Looking back it makes more sense: I myself am not two halves.

My parents are gemologists, so I've been lucky enough to grow up seeing a lot of fantastic gems—this might explain why they're jutting out of my skin. The final little touch is a halo. It's a dig at all that old Christian art that I find horrifically boring. I'm also definitely not a saint in the Irish Catholic sense—and it's fun to revel in that sometimes''・ 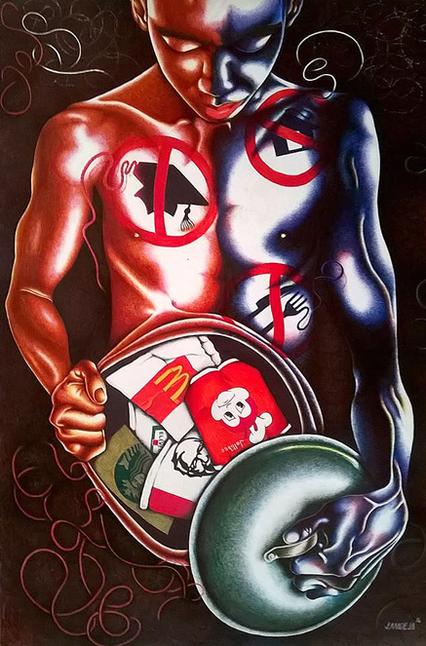 ''I'm not good in English but I'll try to explain my drawing. My own idea. This drawing is all about the poverty in my country. The boy it's me, I represent all people in my country suffering a poverty situation. The tattoo in the body is no house, no education, and no food. The object inside the stomach is a popular fast food here in the Philippines. Not to all person, can't afford''・

・​​Fargo  1996  ''a film by Joel & Ethan Coen''
William H. Macy as Jerry Lundegaard, a guilty party with an inquisitive police chief showing up on his doorstep, is shown nervously doodling. This is doodling at its basest form; thoughtless hand movements, often embellishing something already printed; in this case, onto his ''I heart GOLF'' memo pad using what appears to be a classic Birome ballpoint. In his nervous, repetitive strokes you can almost hear the ''oh dear, oh dear, what to do, what to do'' panic or denial of pending trouble. Macy's Academy Award nomination as Best Supporting Actor was one of seven for the film. Macy didn't win but Frances McDormand did (Best Actress) and so did the Coen brothers (Best Writing/Original Screenplay).
Any film portraying both the genius and banality of doodling is worthy of a nomination if only for keeping the artistic or autistic passions, obsessions, or nervous tendencies of amateur doodlers or wanted felons alive・ 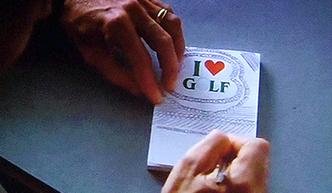 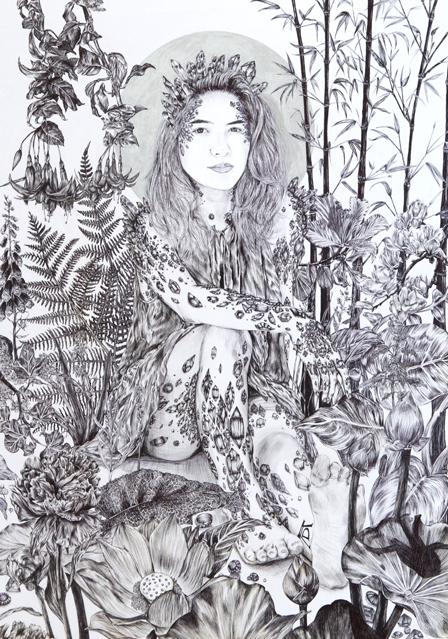 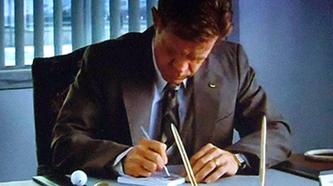 ・Rain Man  1988  director: Barry Levinson
Dustin Hoffman as ''idiot savant '' Raymond Babbitt is shown doodling in a hotel room during a cross country drive with brother Charlie (Tom Cruise), who is effectively holding him for ransom.
''Rain Man'' Hoffman is using what might be a felt tip or magic marker to sketch some of his experiences on-the-road, but close within reach can be seen ballpoint pens, one or two Papermate pens, identifiable in a glass and pocket protector on the tabletop. That means somewhere in one of those spiral notebooks of his are undoubtedly some strokes of ballpoint savantism. The film won four Oscars, including Best Actor for doodling Dustin... 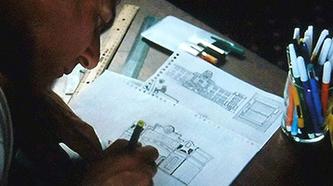