The DOH!  moment (sound of pen snapping in mouth)...

​Character actor Jim Varney as trouble-prone Ernest, much-mimicked TV commercial star who also made it to the big screen. In this 1990 film, Ernest does jury duty. In the Jurors' box Ernest realizes the gravity of the proceedings, composes himself and jumps into character as a responsible juror... 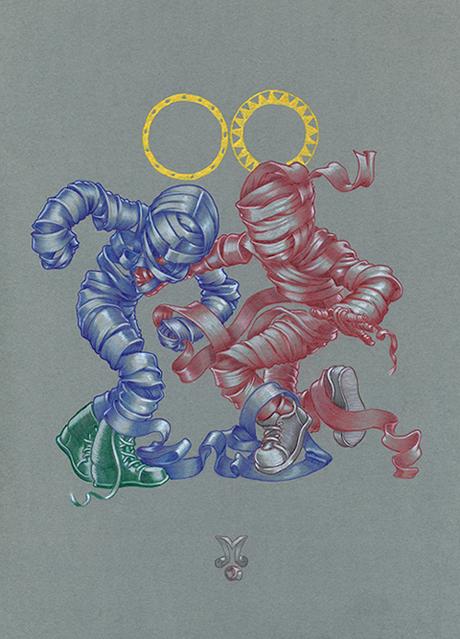 ''Jainkoak Txiki  means 'Little Lords' or more specifically 'Little Gods'. It’s the old good-versus-evil fight, but the more they fight, the more they mix in each other. I love these two characters made of tissues like some empty mummies. This is the second time I use them and I think I will continue to draw or paint the rest of their fight. It’s also a drawing about religious wars and my love of mythologies. For me, prophets, gods and messiahs are just like old super heroes.

I've always been fascinated by religious paintings. It was my very first contact with art, so all my paintings and drawings talk about that. The titles and sentences are always important in my work. Most of the time I try to use different languages because I’m tired of using both French and English. Growing older, I want to be closer to my roots so, for this one, I used Euskara which is the language of my country Euskadi. I don’t know the language and now I’m trying to learn it and pay tribute to my culture by using it in my work''・

Jainkoak Txiki  is on display as part of  The Ballpoint Show  group exhibition at Pony Club Gallery in Portland, Oregon, throughout November.

(Experimentation on a Prisoner Of War)

​''This picture was drawn on June 6th, this year. On that day there was news about World War II on TV. The news was about a documentary of the war, and the part I watched was related to the Japanese army‘s Unit 731 experiments on live human beings (not Taiwanese). It was so cruel that I felt extremely angry. Therefore, this picture came out.

I didn't mean to make any judgement, neither did I want to cause any international disputes. I watched the news and felt very angry. My work was just my feeling about an old event. I had no way but draw the picture in red to express my anger.

I drew it directly in ballpoint pen without any preliminary sketch, and it was created by myself (not a copy of anything showed on the news). It took me around three hours to finish this drawing''・ 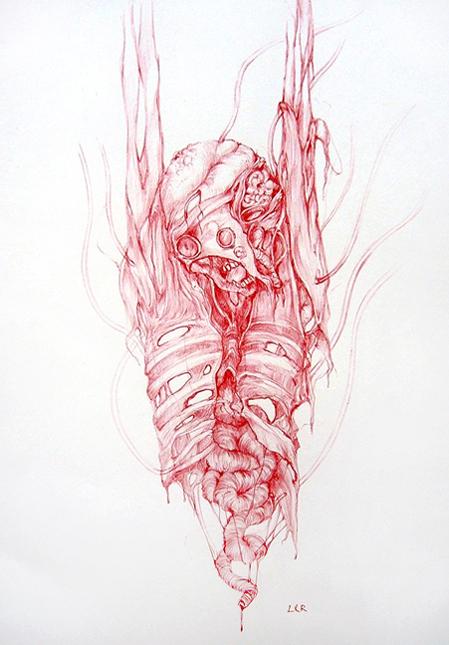