Van Orton extends a 'Thank you' to the man and tosses the leaky ballpoint on the table as he rushes to the nearest washroom. Ballpoint cameo #2: It's a vanity ballpoint pen, emblazoned with a company name, in this case CRS; it's the name of the company which produces these 'games', Consumer Recreation Services.

Those kinds of promotional pens, otherwise seen as 'bad ' ballpoints, are actually the go-to pen for ballpointers needing to fill in large areas or lay down thicker layers of ink・

''May I help you?'' Van Orton asks. The man offers no verbal reply, but sets his drink down and points toward Van Orton's shirt pocket. Ballpoint cameo #1: a leaky pen has left a blue ink stain (this is why they invented pocket protectors!). 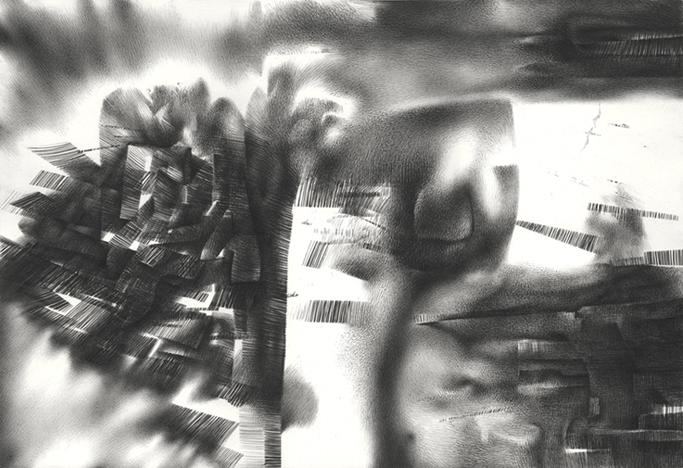 ''Almost all of my ideas come from shapes suggested by nature. Here, I have pulled from a series of sketches related to the studies I've done on plants and grass, investigating the various layers of soil and how they behave in the presence of the wind; sparse or dense, motionless or bent by the air. I flowed those ideas into this work, spatially and intellectually re-elaborated, reorganized via constant dialogue between memory, evocative processing and graphic studies. A reinvention of reality. There are two large spaces left in white, like an elbow. These graphic pauses are needed to balance the design, especially when dealing with such descriptive themes, and help the alternation of forcefully executed lines to communicate with the more softly defined graphic elements. Many changes of direction and expressive force can be seen.

I get very good results from my trusty Bic, held in a certain way with a minimum grip. Different areas of the design exploit all the different features of the versatile and expressive medium. There are areas where less definition is sufficient and others where meticulous work must be conducted with great patience. Pens that release more ink are as useful as those that release less ink, working as equals. I take this peculiarity into account and use the pens to my advantage to achieve the graphic effects I desire. A work of this size requires a full week of attention''・

・The Game  1997・Director David Fincher
t​​​Early in the movie, jaded, haunted financier Nicholas Van Orton (Michael Douglas) is waiting in an airport boarding area. A real-life, real-time 'game' is about to turn his life upside down. The game came via a gift-card presented to him on his 48th birthday by his younger brother​ Conrad (Sean Penn), who claims to have participated recently and recommends it.
​​    Van Orton is given the impression that he failed an entry exam which would've allowed him to initiate his game, but we soon learn this is actually part of it. In a scene marking the unannounced start of Van Orton's game, two ballpoint pen-related phenomena make an appearance within less than a minute of screen time.

Van Orton notices the man across from him is staring at him.