For 2018, Mace tapped a motif with sentimental connection. As reported in The Ballpointer's online retrospective of his work, a series of imaginative Mace dogs were a highlight of his earliest exhibitions, circa 1990. Features of this year's Dog Chasing Tail  bear likenesses, but updated with newer tricks from his ballpoint repertoire. Mace employed his innovative ''stop-motion'' effect, which shows extremities such as arms or legs in different stages of movement, but this time via his ''invisible ink'' dry-pen technique. Mace regarded that stop-motion effect as an ''accidental innovation'' stemming from a lack of preliminary sketches and indecision about which extremity worked best, but it soon became part of his vocabulary. ''It shows the drawing process, expresses movement in an otherwise inanimate image, and creates an interesting pictorial.'' Mace also positioned an actual Japanese postage stamp on this dog's tongue, harkening back to his practice of applying stickers and stamps to relevant drawings. A 'Year of the Dog'-related stamp was bought at his local post office during a break in drawing.
The ballpoint elder  corrected my observation that this may be the most 'Mace-like' design of the series thus far: ''I wouldn't saythat ; for sure there's much that longtime fans will quickly recognize, but all the card designs present different aspects of what I do in some way or another.'' Still, Mace admitted some uneasiness that his dog design might've strayed too far from Japanese sensibilities, even for customers who opt for his cards for that very reason. Positive response upon release proves his concerns unwarranted・

The Ballpointer 's special online retrospective of Lennie Mace's ballpoint pen art will wrap up this month with Decade 3 : 2004-2014.

New Year Cards & more can be ordered from lenniemacemarket.com. ​​・ 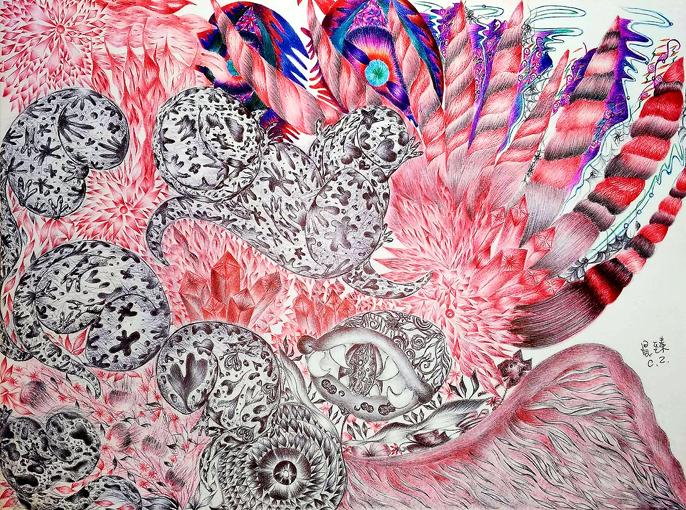 Enter 2018, Year of the Dog  for Far-East Asia, where people send New Year cards instead of Christmas cards and artist Lennie Mace, as part of his long list of art activities, creates annual New Year cards to get in on that niche market in his adopted homeland Japan.
The designs follow the animals of the Chinese Zodiac. 2017 was the Year of the Bird, for which Mace created a design he thought might be a tough act to follow. ''It was my most successful card to-date, a near sell-out,'' he explains. It certainly helped that since a couple of years ago his New Year cards are also being sold through retail outlets as well as his own 'goods' website. Mace jokes that he may have to rethink the benefits of such wider distribution for cards originally initiated as a perk for ardent followers: ''I heard from a person who bought the cards, telling me they received the same card from someone else who'd obviously also bought cards!'' ...

''Appearance of the fetus here is a metaphor for all things before birth, in the parent. Even if the human species of same appearance gave birth to twins, although the same outward, the consciousness is their own and different. It will go through collision continuously in the evolution of individual life. Agitating each other with similar and different souls, swaying in this vast universe. It's will evolved sometimes in the individual's body as if to occupy a region but out of tune with the environment.

This picture is finished three months, only painted by ballpoint pen. Extensive use red and black to convey a strong contrast, highlight the tension of life and not yield, and color overlapping pull and drag the body of the heart. Most special is a rough feeling for each individual body in this picture, penwork more random and unrestrained. Then this heart of the eye used many colors overlap, each color at least stacked three or four layers and the line are so delicate and the images are also more meticulous''・       ​Artwork & Chinese poem © Chen Zhen 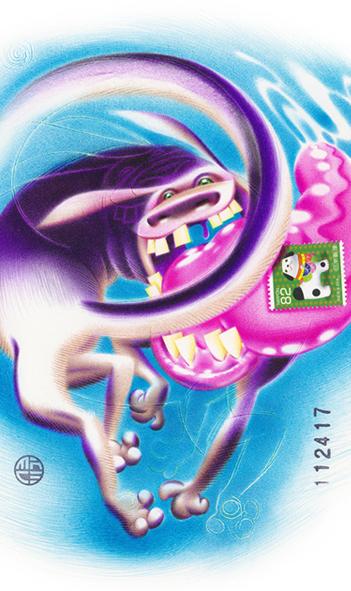